LEARN HOW TO PRONOUNCE THE WORDS WITH THE FRENCH PHONETIC ALPHABET

The IPA symbol is what linguists use to mark a certain sound. The common spelling column indicates typically what letters form the sound in a French word.

Vowels are sounds produced without any obstruction to the air exiting the mouth. These are sometimes hard to distinguish to the untrained ear, especially the phonemes /y/ versus /u/ and /œ/ versus /ø/.

/œ/ – veulent, seul, professeur (this sound does not exist in English) Note: a tilde symbol (~) lies directly above each the letter.(/IPA SYMBOL/ – French Examples) 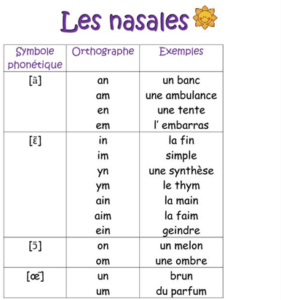 A semi-vowel is produced by a rapid, upward movement of the tongue during pronunciation.

A consonant is a “brutal” sound caused by an obstruction in the mouth during exhalation. DIFFERENCES BETWEEN PRONOUNCING FRENCH AND ENGLISH

A remarking different aspect to French is the utilization of liaisons. Saying deux jours in French does not merit a liaison, but deux ans (/dø‿zɑ̃/) instantly has that /z/ consonant added to connect the words. Another thing is one must remember that French vowels can be classified as either oral or nasal. Most European languages do not need to take into account the fact that air exits both the mouth and the nose. When the velum is lowered throughout the pronunciation of a vowel, this allows air to escape freely through both the mouth and the nose, thus this vowel is said to be “nasal”. French has four major nasal vowels as already discussed.

French is also known for several other things compared to English. In French, syllables have the tendency to end with a vowel, this is called an open syllable. In English, we like to close our syllables with a consonant. Look at this example:

(note: both the near-open front unrounded vowels are nasalized)

Just a few notes on French phonetics where English speakers have some trouble: the [R] consonant in French comes more from the bottom of your throat (sounding like “rrrruh”) Anglophones always have difficulty with this – our R’s are a lot more rounded. The [p] consonant is not “explosive” in French as it is in English. The [l] consonant is not elongated in French as it is in English. If you listened to a French person speak English and they said the word “love”, or “atlantic” for example, they won’t elongate the [l].

Why French sounds as if people are “singing” when they speak? It’s because when a sentence is spoken in French, no single word receives a huge amount of stress. The words flow. This is important. In English, we have a tendency to stress many consonants and different vowels.

In speaking standard French, however, you have to realize that French is characterized by greater muscular tension in comparison to English. For example, the lips in pronouncing English are relatively relaxed, but in French they are more tense. Overemphasize the movements of muscles around the mouth and lips can become some pretty spot on pronunciation. For example, the vowel /i/ (in  words like dit, vite, and grise), forces the corners of your mouth to stretch apart much more vigorously than in the case of English vowels found in tea, meet, and please. In addition, the lips are increasingly more rounded in the French /u/ vowel… look at the words coup, toute, and rouge in comparison to English words like toot or spoon.

These noticeable differences in spoken French and spoken English demonstrate the individual factors involved in pronouncing French vowels. French vowels aren’t as long as they are in English and they do not change tonality midway during pronunciation (with the exception of semi-vowels). English vowels change how they sound depending on what other vowels are present within the sentence being stress.

Word stress is not distinctive in French. This means that two words cannot be distinguished on the basis of stress placement alone. In fact, grammatical stress can only fall on the final full syllable of a French word (that is, the final syllable with a vowel other than schwa)…

The difference between stressed and unstressed syllables in French is less marked than in English. Vowels in unstressed syllables keep their full quality, giving rise to a syllable-timed rhythm. Moreover, words lose their stress to varying degrees when pronounced in phrases and sentences.